From being an exclusive premium content platform to a more searchable platform, Twitter has always come up with innovative suggestions and features from their feedback. Recently, the American microblogging and social networking service, Twitter, announced that it has launched the initial iteration of Twitter Blue, the company’s first-ever subscription service in its platform. With this new service, Twitter is cementing its position as a serious player in the realm of paid subscription-based services. However, with emerging technological advancements, the effective management of social media platforms has become extremely challenging. Therefore, to handle the social media accounts effectively, many businesses and organizations are opting for social media optimization services from reputable digital marketing firms. Such firms will be well aware of the latest advancements and features that would work for their client in the long run.

The first foray into a subscription service model, Twitter Blue allows its users to access premium features, including tools to organize their bookmarks, read threads in a clutter-free format and also benefit from the new “Undo Tweet” feature, similar to an “Edit” button. Though this launch from Twitter has been talked about for months, currently it’s just rolled out to selected markets of Australia and Canada – for a monthly price of $3.49 CAD or $4.49 AUD. This is because, the company wants to gain a deeper understanding of what will make your Twitter experience more customized, more expressive, and encourage discussion around other features that Twitter should prioritize for future iterations of this paid subscription-based services – a move that has been forced by a number of recent investments including the company’s Tip Jar and Super Follow features. 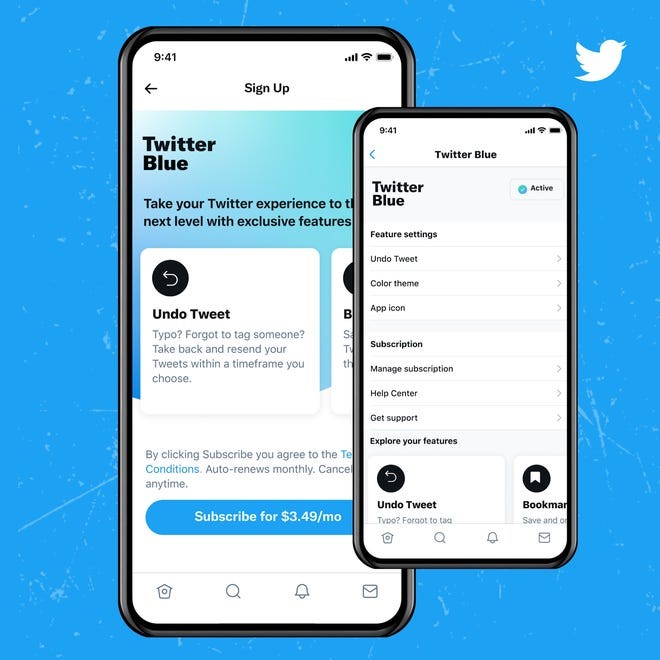 Those who sign up for a Twitter Blue subscription will get a set of features and perks that include the following:

Apart from these features, subscribers get access to certain perks, such as:

All these initial set of features and perks were developed based on feedback the company received from their very own power Twitter community.

However, with Twitter Blue, the company is likely to improve revenue and drive engagement among creators and ‘power users.’ Twitter’s plan for the subscription service had been previously scooped by app researcher Jane Manchun Wong, who uncovered the service’s name, pricing and feature set by digging around inside the mobile app’s code – which actually turned up as in-app purchase, further confirming some of Wong’s findings.

USA TODAY says, “though there had been rumored tweets that Twitter Blue would initially be available in the U.S. for as much as $2.99, Twitter said the subscription service will able in the States later this year”.

Recently the company introduced certain features including Spaces – the social media platform’s response to audio chat hit Clubhouse – a Tip Jar – that allows users to send money directly to their favorite accounts; – and Fleets, which allows users to share text, photos and videos that disappear in 24 hours, similar to Snapchat. Twitter also lets its users know that they will be listening to feedback and building out even more features and perks for their subscribers over time.