LinkedIn Users can now Highlight Career Breaks on Their Profile

People take career breaks for many reasons such as to learn a new skill, for parenting, to cope with a bereavement, caregiving, layoff, and so on. Career breaks are considered unprofessional by many employers and they tend to reject candidates who take a break. Popular employment-oriented online service LinkedIn took note of this practice and has come up with a new feature that allows users to highlight career breaks and provide more information about skills and experiences they gained when they took a break from the workplace. Organic SEO companies keep track of the latest social media updates to help businesses build their brand and connect with their audience.

When the Covid-19 pandemic affected the traditional workplace, many people were forced to leave their jobs. Many others chose to take a career break to re-evaluate their priorities and better manage their lives outside of work. This increased work pauses. LinkedIn’s survey of nearly 23,000 workers and more than 4,000 hiring managers found that nearly two-thirds (62%) of employees have taken a break at some point in their professional career, and just over a third (35%), mostly women, would like to take a career break in the future. Though career breaks are becoming more popular, some hiring managers are still hesitant to recruit a candidate that has to take a break from their profession. LinkedIn’s survey revealed that up to 20% of hiring managers would reject a candidate that took a break.

LinkedIn rolled out Career Breaks because the survey showed that most professionals took career breaks to refine their skills or develop new competencies. According to LinkedIn, over half (56%) of employees say they acquired new skills or improved existing ones — such as problem-solving, communication, and budgeting — during their career break and over half (54%) of women say they are better at their job than they were before. This company introduced this feature after hearing from LinkedIn members – including 68% of women – who said they wanted more ways to positively represent their career breaks by highlighting skills learned and experiences they had during a work pause.

“Career Breaks” provides candidates with an opportunity to start a discussion on the matter and address concerns that may be on an employer’s mind.

LinkedIn members can now add a Career Break to their Profile, which will better capture their life experiences – whether it was taken for full-time parenting, bereavement, caregiving, a gap year, layoff, or other life needs – in a positive way. 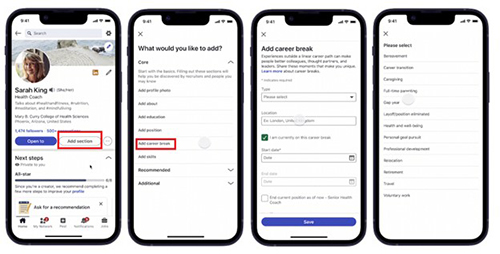 With this tool, professionals can confidently take a break from their careers. A career break could lead to better things, both career-wise, and in life in general.

Now, when recruiters search for candidates, these highlighted pauses will show up, which will allow recruiters to see the life experiences and skills people built while they are away from their careers and how it matches up with the skills they’re looking for in an open role.

A leading provider of social media marketing services in the U.S., we are up to date with the developments in the field. We can help you leverage LinkedIn features for your SEO campaign by optimizing your company’s profile, promoting your brand, and improving your search engine result page ranking.