We all know how local SEO for multiple locations is important for businesses. Similarly, social media marketing strategies for local communities are also very essential for businesses to reach out to targeted audiences, particularly for ecommerce and online retail businesses with multiple branches or geographic footprints. Keeping this in mind, the social media giant, Facebook has launched Neighborhoods, a single destination to build and strengthen local communities on Facebook.

People have always used Facebook to connect with their neighbors and local services – such as to gather support for local businesses, asking for recommendations and tips in local groups, offering support, or meeting neighbors who share common interests and so on. Especially during this pandemic, these connections have surged. Therefore, to tap into those connections in a direct way, Facebook – with 2.7 billion users globally – rolled out a new feature, Neighborhoods within the main app – that offers many capabilities similar to Nextdoor, a hyperlocal social networking service for neighborhoods. 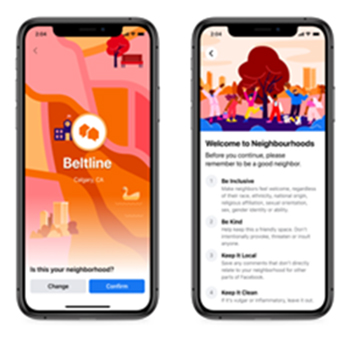 ‘Neighborhoods’ is a single destination that makes it easier to bring the local experience across Facebook into one place, and strengthen local communities on the platform. This dedicated space within the Facebook app helps users to engage with a wider group of locals who they’re not directly connected to. It helps them connect with their neighbors, participate in their local community, and discover new places nearby.

Neighborhoods profile – an opt-in experience of the Facebook app – is dedicated to user’s neighborhood that’s different from their main Facebook profile.

Facebook cited in its blog post that, “to join Neighborhoods, a FB user need to be 18 years or older and confirm their neighborhood. The profile photo, name, and cover photo will be the same as that used in his/her Facebook profile. Users can add other information about themselves such as personal interests, favorite places, and a short bio in Neighborhoods profile”. Once a user joins Neighborhoods, Facebook will confirm with the users if they really live where they say they do.

In addition to join just their own neighborhood, users also have the option to join nearby neighborhoods and can then join discussion areas with other users who live within the same part of the city.

This feature – that is currently available in Canada, and will begin to roll out to select US cities soon – gives Facebook users a space to connect outside of the news feed. Some of the best things it offers FB users include:

This new feature by Facebook – which was under development since October last year – is a great way to gather data on users, and it would potentially keep them on the app longer. Moreover, according to TechCrunch, “this new feature will be sharing users’ neighborly behavior to serve their targeted ads elsewhere.”

Most importantly, once the feature is rolled out in the US, a FB user can consider joining Neighborhoods as their social media strategy. This is because having a good social media marketing strategy in place helps to reach out to a large number of targeted audiences and also boosts the business’ visibility with both existing and new consumers – globally or locally.