Followed by an early November Spam Update and a Core Algorithm Update that finished rolling out at the end of November, Google recently rolled out another update named “December 2021 Product Reviews Update”. Released by Google Search Central’s Twitter handle on December 1, 2021 at about 12:30pm ET, this update that is now rolling out for English-language pages will take only about three weeks to complete. Our search engine optimization company keeps track of new Google updates and trends, and understands how it can impact our clients’ digital marketing campaigns. 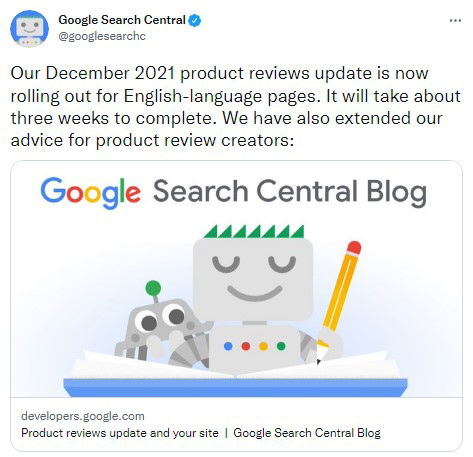 Back in April 2021, a similar Search algorithm update – product reviews update – was launched by Google. The update was designed to better reward product review content. Rather than the thin content that simply summarizes a bunch of products, people appreciated in-depth researched content. It is expected that this update will help writers generating rich content in the product reviews area. According to Google, “the overall focus of this update – which is not a core update – is on providing users with content that provides insightful analysis and original research, and is written by experts or enthusiasts who know the topic well”.

NOTE: Changes can happen at any time for various reasons because, Google’s automated assessment of product review content is only one of many factors used in ranking content.

After rolling out the April update, Google received more feedback from users on what type of review content is considered as trustworthy and useful – that is, users trust reviews with evidence of products actually being tested, and prefer to have more options to purchase the product. It is based on such user feedback that Google works to provide additional product review guidance. They introduced two new best practices for product reviews that include:

The April Product Review Update also introduced some best practices when it rolled out, which have now been merged into a single documentation page named “Write high quality product reviews.”

The rollout of this update has upset some webmasters because they think that it is untimely for Google to apply algorithm updates during the busiest shopping season, even though subjectively these updates have not been too disruptive. However, considering the unpredictable behavior of algorithm updates, it would be most unfortunate if legitimate product review sites unintentionally lose rankings during this critical time of the year.

Technically, according to Google, the latest update is not a penalty against a website’s content. They are just rewarding sites with more insightful review content with rankings, which means that this latest update should only impact product review content and not other types of content.