Google’s algorithms and ranking signals are aimed at recovering data from its search engine and instantly providing users with the best possible results for their query. This is accomplished by delivering webpages ranked by relevance on its search engine result pages (SERPS). A digital marketing company gets businesses on the first page of Google by helping them optimize their websites by keeping up with Google’s many ranking factors. Let’s take a look at Google’s major algorithmic updates over the past two years and their impact on search engine results.

On May 4, Google Search Liaison Danny Sullivan announced on Twitter that Google would be rolling out a broad core algorithm update. This turns out to be a very broad global update and reports say it’s still underway, as Danny Sullivan hinted just after its release.

Later today, we are releasing a broad core algorithm update, as we do several times per year. It is called the May 2020 Core Update. Our guidance about such updates remains as we’ve covered before. Please see this blog post for more about that: https://t.co/e5ZQUAlt0G

Search Engine Journal noted that this is the first core update since COVID-19. The pandemic has changed what people need from Google’s search results.

Google Search has never seen as many searches for a single topic continue over a sustained period as is happening now with COVID-19. Many searches are for news about what’s happening in local areas, such as sheltering updates or the latest on testing. Here’s how we’re helping….

Certain things that were not important before gained search traffic. People are looking for information about the novel coronavirus, health services, where they can access remote services, or places they can buy products they need urgently. On the other hand, losers were searches related to travel, tourism, live entertainment, and in-person events, among others.

Since it was released, many search data companies reported its significant impact. Here’s a RankRanger chart that compares the impact of the May 2020 core update across different verticals: 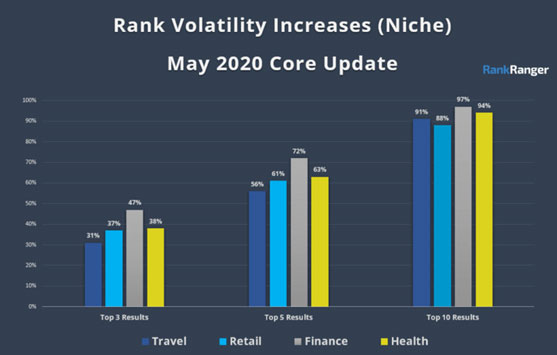 SEMRush reported on volatility by industry as well as the winners and losers. Industries most impacted were travel, real estate, health, pets & animals, and people & society. The winners were local.com, yellowpages.com, superpages.com, businesswire.com, prnewswire.com, globenewswire.com, xe.com, mapquest.com, and gamekidgame.com. The losers were linkedin.com (quite significantly impacted on May 6), manta.com, allmusic.com, idaily.com, nypost.com, discogs.com, afiavillage.com, eventbrite.com, peoplepill.com and owler.com.

Google’s featured snippet is a promoted organic ranking or “Position Zero” that was introduced in 2014. Natural listings of web pages appeared in both the featured snippet and page-1 results (generally in the top 3-4). On January 22, 2020, Google announced that featured snippets would no longer be repeated in search results. Danny Sullivan tweeted that this change “declutters the results & helps users locate relevant information more easily”. 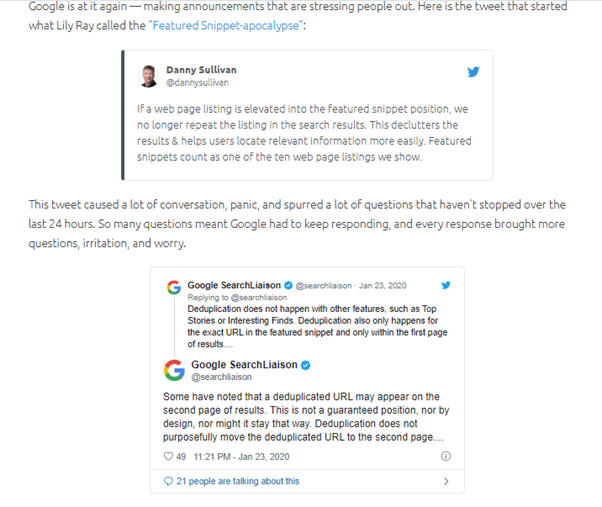 Panic broke out and conversations abounded – what did this update imply for SEO? Well, rank-tracking and organic CTR were impacted. 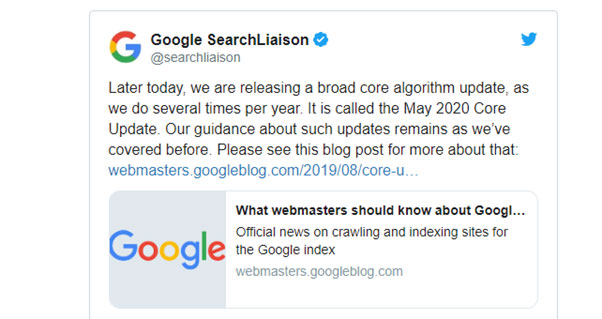 The Jan 13 Core Update impacted all search results globally. Seven categories that suffered the most are: Health, Family & Community, Beauty & Personal Care, Finance, Internet & Telecom, Vehicles, and Law & Government. Health was the worst hit which is consistent with past experience with previous core updates.

Losses can occur in a core update. If you have been hit, what you need to do is assess your content to see that it is meeting visitors’ expectations, Make sure it’s accurate, up to date, and generally written in a way that demonstrates expertise. Sites impacted by one core update need to be vigilant as they are generally more likely to be impacted by subsequent core updates.

On October 25, 2019, Google applied its Bert model to better understand search queries, calling it the biggest step forward for search in the past 5 years. BERT stands for bidirectional encoder representations from transformers and impacted both search rankings and featured snippets. Google said that Bert would be used on 10 percent of U.S. English searches.

On December 9, 2019, Bert was rolled out to over 70 languages worldwide with the aim to help Google “understand searches better than ever before”. And it did. With BERT, Google’s algorithms, for the first time, managed to grasp queries and the connections between words.

Here’s an example of Bert in action: 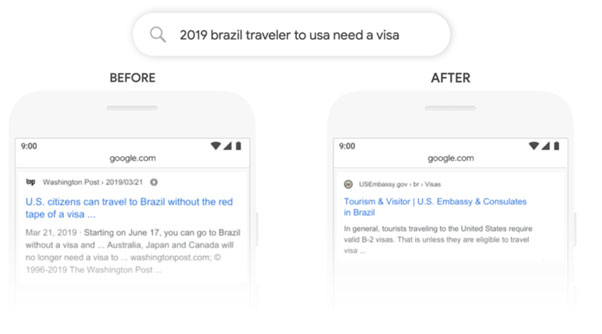 For the query “2019 brazil traveler to usa need a visa”, BERT helped Google understand that the query is about a Brazilian traveling to USA, not the other way around.

This update unleashed frenzy – how do you optimize for BERT, wondered SEOs. And Danny Sullivan replied in a tweet: 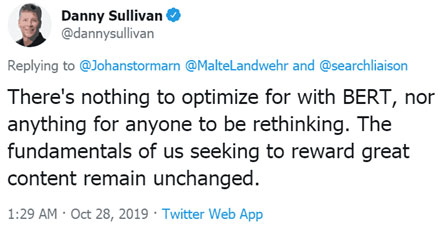 On Sep 24, 2019, Danny Sullivan tweeted that Google was releasing a broad core algorithm update within a few hours and that the rollout would take a few days to complete.

Anecdotal evidence shows the results were mixed: some recoveries and mild wins and losses (10 to 20 percent), and nothing disastrous as in past updates. Some losers had low quality content and others who reported losses attributed it to links. Experts concluded that Google was indeed focusing on links.

This week, we released a broad core algorithm update, as we do several times per year. Our guidance about such updates remains as we’ve covered before. Please see these tweets for more about that: https://t.co/uPlEdSLHoX https://t.co/tmfQkhdjPL
– Google SearchLiaison (@searchliaison) March 13, 2019

This core update had a far reaching impact across sites, categories, and countries. Starting on March 12, there was a massive surge in search visibility and a big drop. In addition to the health/medical niche, categories impacted included commerce, news publishers, lyrics, coupons, games, how-to, and more. Some sites with egregious anchor text repetition were hit hard, while rank monitoring tools showed that many sites that were hit by the August 1, 2018 update recovered. Google also clarified that this update and other recent core updates had nothing to do with any neural matching updates.

Though Google called it a “broad core algorithm update”, the August 1, 2018 algorithm was nicknamed the “Medic Update” as it seemed to focus on health and medical sites. YMYL Your Money Your Life sites were also impacted. Google guidance was referenced from its previous core updates, and said that there’s “no ‘fix’ for pages that may perform less well – the only thing to do was to remain focused on building great content: 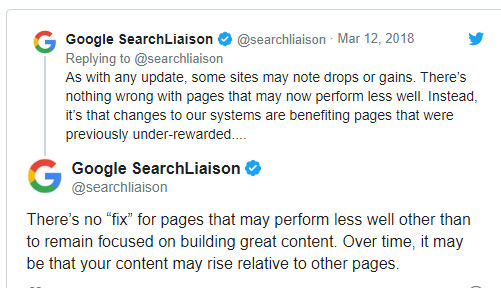 Google said that there is nothing you can do about the impact, but has been suggesting that you can continue to work on improving your website, improve content, and create a better overall user experience, which ultimately, would lead your site to rank better with the next update.

On March 26, 2018, Google confirmed the rollout of mobile-first indexing, which uses the mobile version of a page as the canonical version. It focuses on security, speed, mobile-friendly design, and mobile SEO across all services. Things got moving in September 2018 and mobile-first picked up the pace as Google sent out emails confirming the enablement of mobile-first indexing for a large number of domains. This change impacted businesses that did not have a responsive site with identical mobile and desktop content.

Dealing with Google’s algorithmic updates requires a comprehensive strategy. SEO experts know that these changes are part of the game and know what it takes to help sites avoid algorithmic penalties. And if sites do end up being impacted by Google’s actions, digital marketing gurus can help them regain their lost rank and traffic.